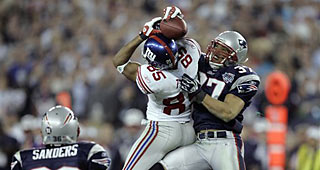 David Tyree has left his role as director of player development with the New York Giants.

He's held the role since 2014 after spending most of his playing career with the team.

Tyree is best known for the helmet catch in the Super Bowl XLII upset of the New England Patriots.

"I was honored to serve and impact the players for the past six years for the most iconic franchise in NFL history," Tyree said. "I wish the Giants and Coach [Joe] Judge the best moving forward into the 2020 season. Thank you to everyone who has contributed to my personal and professional growth along the way. Once a Giant always a Giant."