DeSean Jackson: Players Should Wear Microphones If Stadiums Are Empty 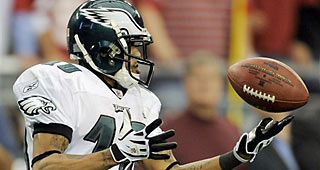 If the NFL has to play games without fans this fall, DeSean Jackson believes the league should capitalize on the opportunity.

During a YouTube conversation with teammate Lane Johnson, the Philadelphia Eagles wide receiver suggested "mic'ing up everybody" so that fans watching at home can get an idea of what football really sounds like.

'Yeah, it's gonna get crazy. I think they should, though. They should give the fans the inside to really see what goes on between the white lines," Jackson said. "It gets crazy, bro. I know in the trenches it gets crazy, and I know out there on the outside it gets crazy too with the conversations we going back and forth on."