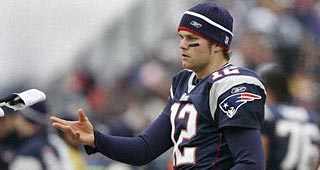 "When he was on practice squad his rookie year, I actually called my financial advisor about him," Bledsoe recalled to ESPN. "I was like, 'I really like this kid. He's never gonna be a starter. He's gonna be Jason Garrett or one of those guys who's just going to be around forever. You'll really like the kid.' And we really liked the kid, we kind of brought him in, he was over at our house for dinner probably once a week. I really liked the kid, and still do. But nobody, outside of maybe Tom himself, would have ever predicted that he would go on to be a starter in the league and be in the conversation as maybe the greatest of all time."

Brady was never on the practice squad, but he was the Patriots' fourth-string quarterback at the start of his rookie season.