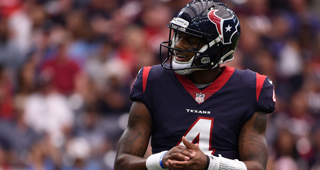 The Houston Texans coughed up a 24-point lead in less than 11 minutes against the Kansas City Chiefs on Sunday, but Bill O'Brien still has the confidence of his players.

"There's no doubt," Deshaun Watson said. "I mean, you might have doubt, but there's no doubt. I mean, I love that man. I'm going to play hard for that man. Y'all can say whatever you want to say through all the media and all the writing, but as long as I'm at quarterback, he's cool with me.

"He's got my heart. He's going to get all of my 110% every time I step on that field. So y'all can say whatever, but [I'll] always be rooting for that man and going to play hard for him."

Watson became the first quarterback in NFL history to lose a playoff game with 300-plus pass yards, 3-plus total touchdowns (two passing, one rushing) and 0 giveaways.