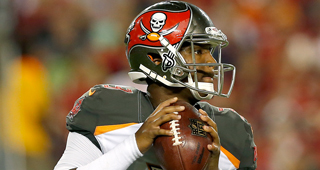 If James Winston returns to the Tampa Bay Buccaneers under Bruce Arians next season, Carson Palmer sees big things on the horizon.

Palmer threw 22 interceptions and had a 83.9 passer rating in his first year under Arians with the Arizona Cardinals. He became much more productive with experience and two years later had the best season of his career.

"You don't have that experience in Year One," Palmer said. "You need Year One to go back and watch the film and see yourself doing it wrong and the receivers seeing themselves doing it wrong and then Year Two, really things start to click. That chemistry starts to develop and that trust and that confidence in the offense starts to develop. If Jameis is back in Tampa, I would expect Year Two to be a massive year for him."