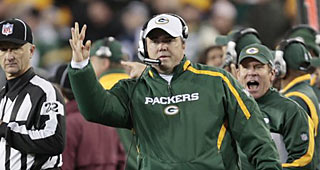 Mike McCarthy, who was fired by the Green Bay Packers last season, is hoping to return to coaching next year.

McCarthy won 61% of his games with the Packers, made the playoffs nine times in 13 years and won Super Bowl XLV.

"To do it right and to be in position to win it every year, that's what I'm looking for," McCarthy said. "So that's the opportunity, that's who I want to be paired with. And I'm not trying to just go win one, I'm trying to win them all. And I've always taken that approach. That's always been my outlook. And every decision that's ever been made towards the football team, it was A, number one, what's best for the locker room? And it's about moving that locker room forward, 'cause nothing ever stays the same. You're either getting better or you're going the other way. And that's in life and in football."