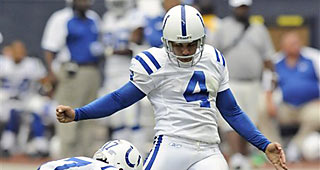 Adam Vinatieri will undergo season-ending knee surgery and will be placed on injured reserve.

Vinatieri's future in the NFL is in doubt after 24 seasons.

Vinatieri routinely said his knee wasn't a problem, but something caused him to go from being one of the most reliable kickers in league history to being one of the weakest links on the Colts roster this season.