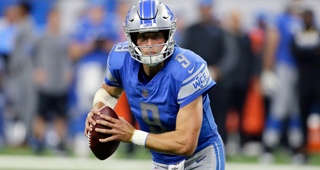 Tate has played with the Seattle Seahawks, Detroit Lions and Philadelphia Eagles.

"To me, as of now, where I am today, I think Stafford's been the best quarterback I've played with," Tate said. "The guy can flat-out play. He's tough, his attitude is amazing and he just wants to play ball. For me, I have nothing but praises for him. It's almost unfair that he's such a good player and doesn't have playoffs or a ring to show for it. That kind of hurts my heart that I wasn't able to help change that."

Tate won a Super Bowl with Russell Wilson during his time with the Seahawks.

"I think over his career, if you put him in another organization, maybe things are different. I don't know. Because I've played with some guys over my years that I've won playoff games with that I don't think are as good," Tate said.