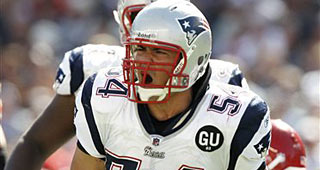 Tedy Bruschi posted on Instagram on Monday that he is "doing much better" after suffering a stroke last week.

Bruschi wrote that around 10:30 a.m. on July 4 he lost the use of his left arm and realized he was slurring his speech when he tried to speak. He wrote that his wife also noticed the left side of his face was drooping when he turned to her.

"We immediately knew what was happening. These are stroke warning signs. We called 911 and an ambulance got me to the hospital. Thank you for all your kind thoughts and prayers. I'm doing much better," he wrote.

Bruschi, 46, previously suffered a stroke in 2005, while he was a member of the Patriots. He missed the first six weeks of the season, then returned to play eight months after the stroke.