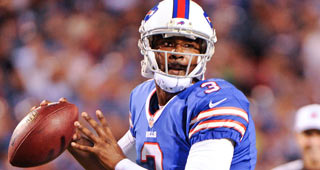 EJ Manuel has retired from the NFL.

Manuel signed with the Kansas City Chiefs this offseason to compete for their backup quarterback job.

Manuel was a first round pick by the Buffalo Bills in 2013.

Manuel signed as a free agent with the Oakland Raiders in 2017 and appeared in two games with one start that season. The Raiders released him before the start of last season.