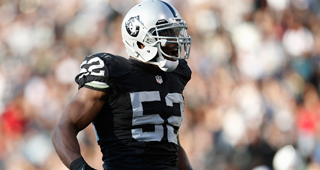 The Oakland Raiders haven't ruled out the possibility of trading Khalil Mack.

Reports indicate the Raiders have received interest from as many as 12 teams on Mack.

Mack hasn't received any offers from the Raiders since February. The Raiders could be waiting to see whether Mack is willing to give up game checks, which would amount to $814,000 per week.