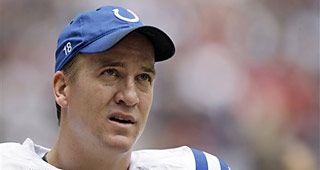 Prior to the 1998 NFL Draft, author Hunter S. Thompson advised Jim Irsay to have the Indianapolis Colts take Ryan Leaf over Peyton Manning with the first overall pick.

Thompson was willing to give Irsay a $30 million loan if the Colts selected Leaf, but not if they picked Manning.

Leaf tweeted Thursday a picture he recently received of the letter that the late Thompson sent Irsay.

"[Leaf] looks strong & Manning doesn't -- or at least not strong enough to handle that 'Welcome to the NFL' business for two years without a world-class offensive line," Thompson wrote in the letter to Irsay a month before the 1998 draft.

Manning led the Colts to a 141-67 record, the playoffs 11 times, eight seasons of at least 12 victories and the Super Bowl twice, winning one of those appearances.