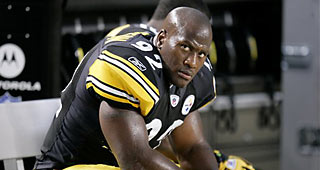 Harrison played in just three games this season for the Steelers. Harrison signed with Pittsburgh in 2002 as an undrafted rookie.

"There was no animosity or bad feelings. It's just the business of the NFL," Bill Parise, Harrison's agent, told ESPN's Josina Anderson. "I believe he still wants to play. We'll have to wait and see what happens with waivers."

Pittsburgh activated Marcus Gilbert from the reserve/suspended by commissioner list.