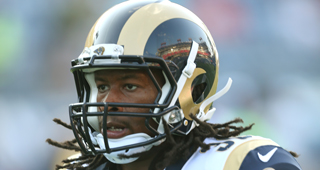 Sean McVay has endorsed Todd Gurley as an MVP candidate as the season winds down.

Gurley totaled 180 yards and scored four touchdowns in an important win for the Los Angeles Rams over the Seattle Seahawks on Sunday.

The running back leads the NFL in touchdowns (17) and ranks second in all-purpose yards (1,817).

"I'm obviously going to be biased to Todd," McVay said, "but I think if you just look at it from a production standpoint, he's as productive as any player."

Carson Wentz (ACL) and Antonio Brown (calf) were in the MVP conversation, but injuries have firmly placed Tom Brady as the favorite with two weeks remaining.

"He's certainly is a special player," McVay said. "With Todd's success, that is a reflection of our offensive unit, but I think it's a great honor for him. I think he certainly has put himself into legitimate (MVP) conversations with that, just based on the production and what he has meant to our team."