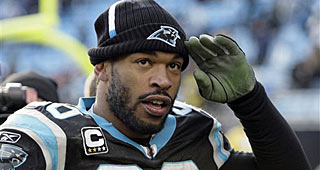 Julius Peppers admitted he let up a little bit when sacking Aaron Rodgers in the fourth quarter of Carolina's win over the Packers.

Peppers said he wanted to “get the ball but make sure [Rodgers] didn’t get hurt.”

Peppers played for the Packers for three seasons.

Mike McCarthy and the Packers must decide whether to let Rodgers play for their final two games of the season with their playoff hopes being all but eliminated.