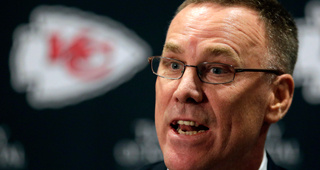 Jimmy Haslam has made John Dorsey's top priority as general manager of the Cleveland Browns to find their quarterback.

"That will be John's No. 1 priority. We're going to do whatever it takes to get a QB."

The Browns have passed on opportunities to draft Carson Wentz and Deshaun Watson in successive drafts.

"Let's sit down as a group [at the end of the season]," Dorsey said of Cleveland's QB quagmire. "This is a quarterback-driven league. We all know that and we all know, to succeed and to go a little bit farther and farther and farther, you need one of those guys. So I think it's an evaluation period that's going to take a little bit to put a plan together.

"The draft is four and a half months away. Free agency is three months away. We have ample time to make a plan here."