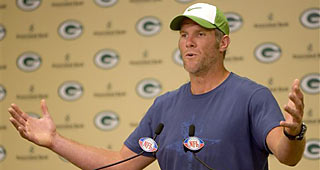 Brett Favre told ESPN Wisconsin's Wilde & Tausch on Thursday that he has thought about returning to the NFL as a general manager or coach.

"That type of stuff has crossed my mind," he said. "Because it's no different to me than coaching. It's being involved in the game in some aspect."

"When I coached high school football for two years, it really wasn't on my radar," Favre said. "My dad did it for many, many, many years, [but] I thought, 'I just don't have anything left in the tank from a competitive side. What type of coach would I be?'

"I always thought I would be a good coach, but I didn't know if I had the effort in me. Well, I did. I'll tell you what, it was a joy. The competitive spirit came right back. It was obviously different than playing, and so I had a lot of fun."