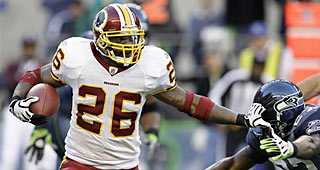 Clinton Portis contemplated killing one of his former financial managers after losing millions of dollars in various investments.

In a Sports Illustrated story, Portis recounted a night four years ago in which he sat in a car outside a building, holding a gun and awaiting one of the managers he felt had ruined him financially.

The former NFL running back made $43.1 million in his nine-year career, but most of it had either been spent or lost through investments or, as one lawsuit asserted, bank withdrawals without his consent.

An anonymous friend talked him out of committing murder.

Portis' financial plight became public in 2015 when he filed for bankruptcy.