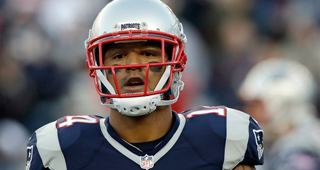 The Minnesota Vikings reportedly support Michael Floyd's claim that any alcohol present in drug tests he took while under house arrest came from drinking kombucha tea.

Vikings COO Kevin Warren wrote a letter of support and sent it to Robert Feinberg, Floyd's attorney, according to the Pioneer Press. Feinberg submitted the document in a motion requesting that Scottsdale City Judge Statia Hendrix cancel Floyd's hearing scheduled for Monday and restore electronic monitoring for the remaining five days of his 96-day house arrest.

Floyd was ordered to attend the show-cause hearing after a review of alcohol monitoring reports indicated the presence of alcohol in several tests.

In a statement released on June 16, Floyd said he "drank several bottles of kombucha tea drinks" while watching a movie at his home and was "unaware that the drinks contain alcohol."