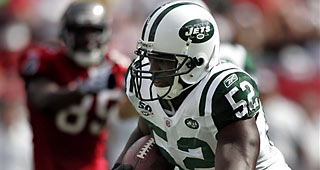 The New England Patriots have agreed to a two-year deal with David Harris.

The New York Jets released Harris on June 6 after being unable to agree on a pay cut with the linebacker, who played 10 seasons for the team.

The Patriots needed a linebacker to play the most snaps alongside Dont'a Hightower.

Harris was surprised by the Jets' decision to release him.

A second-round pick in 2007, Harris ranks No. 2 in tackles in Jets team history.