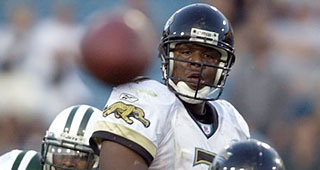 Byron Leftwich only has a year of coaching under his belt, but Bruce Arians is already confident that he'll one day be a head coach in the NFL.

"He'll be a head coach early and fast," Arians said.

Leftwich started out as a coaching intern for the Arizona Cardinals, but Arians move him to quarterbacks coach this offseason. Leftwich believes he was forced to to see the game from a coach's point of view in his decade as an NFL quarterback.

"I played the game as if I was a coach," he said. "I never really had the physical ability to run around. I could throw the ball, but I had to think my way through the whole time. I think (Arians) understood that and appreciated my knowledge, how much work I put into the game."