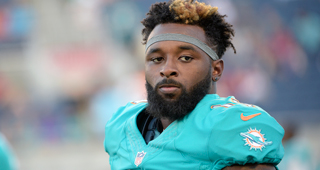 The agent for Jarvis Landry put a deadline of start of the regular season on a contract extneion.

Landry will “absolutely not” be angry if no deal is reached, according to his agent.

Landry has one year left on his contract that will pay him $893,850 this season, less money than at least 100 other NFL receivers will earn in 2017.

“The ball is still in their court; we are happy to go into a fourth year healthy and eager to put another year in the books,” agent Damarius Bilbo said.