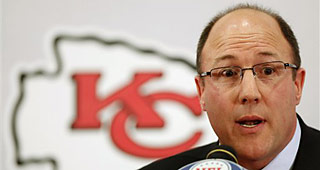 Ryan O'Callaghan, former offensive tackle for the New England Patriots and Kansas City Chiefs, has come out as gay.

O'Callaghan came out to himself in junior high school but he decided that he would never let anyone know.

“If you’re a gay kid and you hear someone you love say ‘fag,’ it makes you think that in their eyes you’re just a fag too,” O’Callaghan told Outsports on a recent visit to Los Angeles for his first-ever Pride celebration. “That got to me a lot.”

O'Callaghan had planned to commit suicide when his NFL career ended until a small group of people in the Chiefs' organization helped him.

“No one is going to assume the big football player is gay,” he said. “It’s why a football team is such a good place to hide."

O’Callaghan can’t recall a single time during his six NFL seasons that he heard someone use a gay slur.

“I started spending all my money to put myself in a position where it would be impossible, or at least extremely difficult, to back out of killing myself,” said O'Callaghan.

Price encouraged O’Callaghan to spend some time with Susan Wilson, a woman who worked with the Chiefs and the NFL counseling players on drug abuse.

“David saw the pain pills as the problem, and they were,” O’Callaghan explained. “But the real problem was why I was abusing them. And it wasn’t just the injuries.”

Wilson became the first to whom he confided he was gay. As O'Callaghan ended his drug abuse, he came out to Scott Pioli.

“People like me are supposed to react a certain way, I guess,” Pioli told Outsports. “I wasn’t minimizing what he was telling me, but I’m waiting for the other shoe to drop. He built this up and built this up to the point where he said he was nearly suicidal. What Ryan didn’t know is how many gay people I’ve had in my life.”