Jeremy Maclin Learned Of Release By Chiefs Via Voicemail 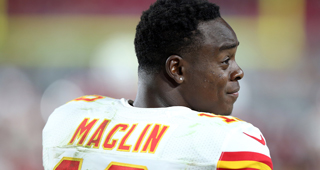 Jeremy Maclin was upset and shocked to learn of his release from the Kansas City Chiefs earlier this month via voicemail.

"Through a voicemail," Maclin said asked how he learned of the news. "[From G.M.] John Dorsey. I was upset, I was shocked. Apparently, they had been trying to trade me for two or three months. Which who knows if that’s true or not? I would just think that ... a guy who is going into his ninth year would know if he's being shopped or not. It is what it is. I still have respect for Big Red, still have respect for the organization. I'm not going to bad mouth anybody or talk any dirt on anybody. It was an unfortunate situation. They felt like they didn’t want me as a player anymore, so it is what it is. I'm happy with where I am right now, and I think that might be the last time I talk about what I call my former life. So I don't think I want to talk about that anymore."

Maclin added that the Chiefs never asked him to take a pay decrease to remain with the club.

"There was not a discussion with me or my team," he said. "I've heard a lot of rumors coming out of there. I've heard they thought I lost a step, my price tag was too high. Whatever the case may be, I'm ready to play some football. That flame that burns inside of a competitor, that thing got a lot brighter."