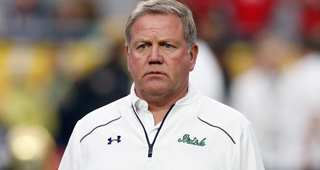 Brian Kelly says DeShone Kizer should have stayed with Notre Dame for another season rather than turning pro as a redshirt sophomore.

"He should still be in college. ... He needs more time to grow in so many areas, not just on the field but off the field," Kelly told SiriusXM NFL Radio on Monday.

Mel Kiper Jr. and Todd McShay initially said Kizer should have returned to Notre Dame when he declared in December.

Kizer is currently projected to go No. 27 overall by Jeff Risdon in his most recent mock draft.