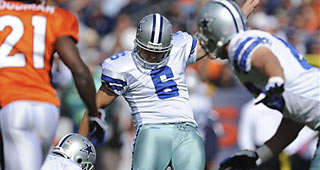 Folk had been with the Jets since 2010 and is the second-leading scorer in franchise history, behind only Pat Leahy. His 81.3 percent accuracy on field goals is the highest in team history based on a minimum of 100 attempts.

"It's a sad day, but that's the business side of things," Folk said in a statement. "I had a great seven years here. I think the only thing that would've topped it off would've been a couple of Super Bowl wins."

Giacomini, 31, who signed a free-agent deal with the Jets in 2014, played only five games last season due to a back problem.