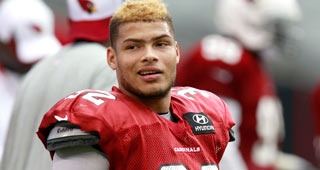 The NFL has a small number of vegan players, headlined by David Carter, Tyrann Mathieu and Griff Whalen.

"Socially, it kind of isolates you," Carter said. "Football is a machismo sport, which is great, but everything can't be machismo. On the field and at practice, yes, you can be machismo, but when it comes to diet, you need to have compassion for your body."

Mathieu's agent says his client is about 90 percent vegan.

Whalen has been vegan for the last two and a half years. He grew up in Ohio, eating hearty Midwestern meals and "a lot of junk food."

"Pretty much all of my teammates thought it was weird," Whalen said of his diet. "Everyone's first question is, 'Where are you going to get your protein?' "

Both Carter and Whalen obtain most of their protein from legumes, such as beans, peas and peanuts.

"They see my plate and it kind of triggers a thought," Whalen said. "They'll ask questions about it. I would suggest [veganism] to anybody, but I don't go out of my way to do it, especially with an NFL team. They have a special nutritionist. That's not my job."

Jarvis Landry attempted a vegan diet in June but only lasted about a week.

"The hard thing is not eating a plant-based diet -- it's knowing what to eat and planning for it," Whalen said. "All of a sudden, you can't use meat, dairy, eggs, fish, anything -- it's like 90 percent of most guys' diets. Landry struggled because he just jumped right into it without any type of planning, but it was just cool that he wanted to try and he was all excited about it."