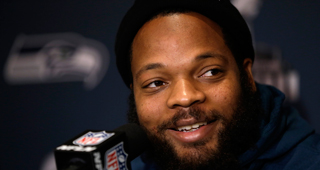 A number of notable NFL players have joined Colin Kaepernick in kneeling or raising a fist for the national anthem to protest police brutality and racial inequality, but Michael Bennett believes at least one white player needs to join in the pregame displays for the protests to reach the next level in public discourse.

"You need a white guy to join the fight," Bennett said. "The white guy is super important to the fight. For people to really see social injustices, there must be someone from the other side of the race who recognizes the problem, because a lot of times if just one race says there’s a problem, nobody is realistic about it."

Though Bennett has not kneeled this season, his brother, Martellus Bennett, is one of the players who has raised a fist after the national anthem.

"If somebody like, say, Aaron Rodgers got behind us, I think it would touch home for a lot more people," Seahawks defensive end Cliff Avril told The Seattle Times. "At the same time, I see why they probably wouldn't, because they don't know what we’re going through. That's one of those situations where it's unfortunate."