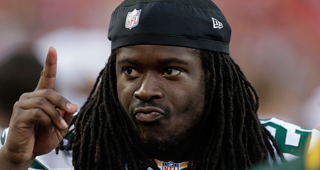 Eddie Lacy missed curfew Wednesday night in Detroit ahead of the Green Bay Packers' win over the Detroit Lions on Thursday.

Lacy didn't appear in the game until the final seconds of the first quarter and didn't touch the ball after he lost three yards on a pass in the second quarter.

"Leading up the game, frankly, there's an internal football decision that was made," Mike McCarthy said. "That's what resulted in Eddie's [limited] reps."