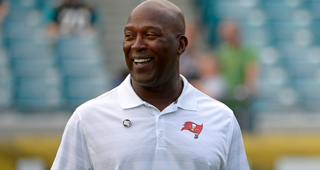 With a fourth-quarter collapse on Sunday, the Buccaneers earned the No. 1 pick in the 2015 NFL draft, according to an ESPN.com report.

The Bucs lost to the Saints, 23-20, despite carrying a 13-point lead into the fourth quarter. The collapse happened with the Bucs (2-14) playing a lot of backups, and it led to questions about whether the team "tanked" to get the No. 1 pick. Coach Lovie Smith strongly denied that.