Jets Have Lowest Cash Payroll In NFL At $86.1M 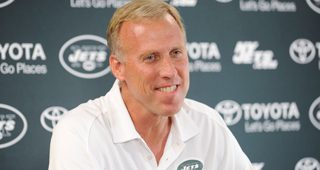 The New York Jets currently have the lowest cash payroll in the NFL at $86.1 million.

Their once-top-heavy cap has thinned to the point where only three players have cap charges of at least $7 million -- D'Brickashaw Ferguson ($11.7 million), Nick Mangold ($7.2 million) and David Harris ($7 million).

John Idzik has systematically dumped many of the Jets' highest salaries.