NFL 'Not There Yet' On L.A. Proposals 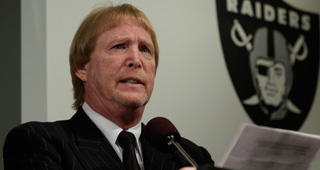 An NFL team in Los Angeles remains a far off possibility despite uncertain situations for the Buffalo Bills, Oakland Raiders, St. Louis Rams and Jacksonville Jaguars.

“We’ve been very open that if we had the right opportunity to be back in Los Angeles with the right formula — meaning a stadium — most importantly,” NFL commissioner Roger Goodell said. “We know there are millions of fans who want a team there. We would love to do that, but it has to be successful.

Mark Davis, owner of the Raiders, has talked openly about Los Angeles as a possible future home.