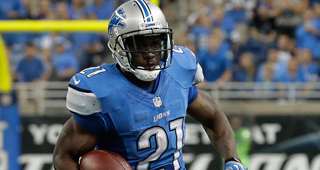 Reggie Bush cites a lack of team chemistry for the Detroit Lions' collapse during the second half of the season.

"I just think that maybe our chemistry as a team definitely struggled and lacked a little bit -- and obviously the turnovers and big plays, making more plays when needed."

Jim Schwartz is widely expected to be fired in the offseason.

"As a team, when you kind of have that mentality that no matter what the situation is, you can always overcome it and come out with a win," Bush said.