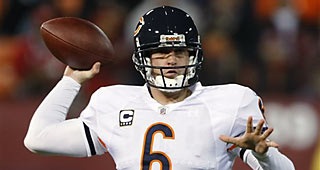 The Chicago Bears may still use their franchise tag on Jay Cutler.

General manager Phil Emery earlier said that the tag would not be the ideal way to keep Cutler.

"I didn't say that I would rule it out," Emery said Friday on WMVP-AM's "Waddle and Silvy Show," per ESPN.com. "I said it's not the first thing we would think about in signing players that we like. If you put a franchise tag on a player, that's a player that you like. We like Jay. If you like a player, you want to move forward in a multi-contract year basis, not a short term."

The franchise tag for quarterbacks in 2014 is expected to be approximately $16.2 million, which is nearly double his 2013 salary of $8.97 million.