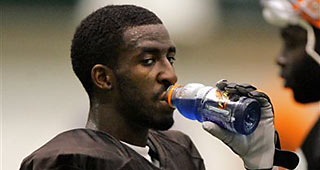 The San Francisco 49ers have acquired Eric Wright from the Tampa Bay Buccaneers for a conditional late round pick in 2014.

Wright is a cornerback that played at USC and UNLV in college and grew up in San Francisco.

Wright was drafted by the Cleveland Browns in the second round of the 2007 NFL Draft.