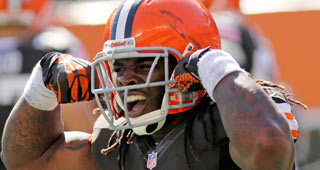 Trent Richardson questioned the playcalling of Pat Shurmer following the Cleveland Browns' 38-21 loss to the Redskins.

Richardson had 24 yards and a touchdown on his first four carries in the first quarter.

But Richardson had just two carries in the second half.

"We [were] ready for the game," Richardson said. "I think we've just got a game plan, and the game plan we had at the beginning of the game, I think we should've stuck with it. But we didn't stick with the game plan and we tried to go do some other stuff, and the outcome came in a different way."

Richardson was taken aback by his inactivity in the second half.

"It's shocking," he said. "But like I said, the game's much bigger than me. I've got to let coach do what he does."

Richardson apologized to the fans.

"Today we let ourselves down and we let the whole city of Cleveland down -- especially, the season-ticket holders," Richardson said, "I feel for bad for them and I want to say as a man, I just want to come to them and apologize because this was the last home game. We're supposed to go out with a blast. It was a big ballgame and we didn't do what we were supposed to do."