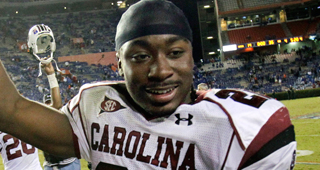 South Carolina running back Marcus Lattimore has decided to enter the 2013 NFL Draft.

Lattimore sustained an extensive ACL and LCL injury in his right knee and has been rehabbing.

Lattimore understands he may have to sit out this season, but has a goal of jogging and catching passes at the end of March for NFL executives and plans to visit with them at the NFL scouting combine in Indianapolis.

Since the injury, Lattimore has spoken with other running backs who came back from knee injuries such as Willis McGahee, Frank Gore and Eddie George.