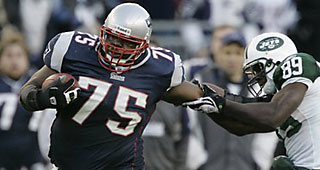 Vince Wilfork appears to be thinner this season due to extra dedication to an offseason training regimen.

‘‘This year, I had a main focus of concentrating on my core,’’ Wilfork said. ‘‘I’m not saying I have a six-pack or anything, but I’m pretty satisfied and pretty happy how it’s gone. And while my weight hasn’t changed, it’s shifted. I worked very hard on it. I don’t want to boast about or make a big deal out of it, but I worked hard on it through the offseason.’’

Wilfork changed his diet and also did some non-traditional workouts.

Wilfork is hoping to continue to be explosive, especially as the Patriots are now a 4-3 team.

‘‘I know people say the older you are, the harder it gets. But to me, every year I go into, I go in with a plan of things I want to accomplish. This offseason was the same,’’ Wilfork said. ‘‘I’m not saying you don’t have to be lighter when you get older, because some people might have to. But how I look at it, each year if I accomplish what I want to accomplish in the offseason, I have a good foundation for going into a season and doing what I want to do.

“I believe if you set goals, and you accomplish those goals, you put yourself in a good situation.’’