Cowboys Sign Sean Lissemore To 'Steal' Of An Extension 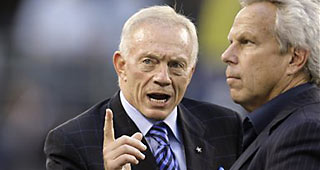 The Dallas Cowboys and defensive end Sean Lissemore agreed to a three-year extension with $3.1 million guaranteed and a $2 million signing bonus.

“That’s a steal for them,” one agent not involved in the deal said.

Lissemore was a seventh round pick in 2010.

"The Cowboys like him and Sean likes being there," Lissemore's agent Wes Bridges said. "Quite frankly, Sean had a decision to make and see if he wanted to wait it out and go to next year, but he didn't want it to be a distraction and wanted to just play ball. He wanted to get a deal done and get it done this year."

The Cowboys see Lissemore as a future starter.

The Cowboys are known for giving out big extensions, but the team has built a defensive line with good depth in an affordable way.