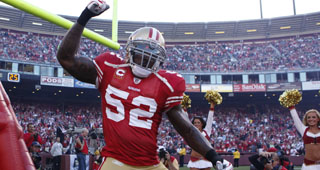 The San Francisco 49ers place such a priority on eliminating the run that giving up big plays is occasionally an unintended consequence.

The 49ers gave up 12 receptions longer than 40 yards, fifth-worst in the league last season.

"I believe you give a little to take a little," Patrick Willis said. "I feel like any time you're able to go out and make a team one-dimensional, and they're going to throw the ball as teams do against us -- you do the statistics -- you throw the ball 50 times a game, you've got to make a play in there somewhere. They get paid too. It's just a percentage game."

Matthew Stafford was asked if the Lions intend to test the 49ers deep in Week 2.

"I don't know, I don't think so," he said. "They're a two-high operation. They've got two safeties deep most of the time and pretty good corners. We'll see. We're going to just go out there and try to execute our game plan and play at a high level."