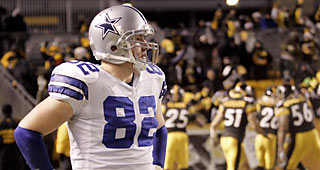 Jason Witten unexpectedly played in the Dallas Cowboys' Week 1 win on Wednesday at the Giants.

Witten had just two catches for 10 yards, but Tony Romo believes the impact of him on the field went well beyond that production.

“That guy was going to find a way to play in that football game,” Romo said Friday on 1310 [KTCK-AM] The Ticket’s The Hardline show. “And honestly, his approach was right, the way he did it, it was the right way throughout the week. Jason’s an old school football player. He loves the game.

“I love hanging out with Jay just because he wants to be football, football 24/7. I love that aspect about him. When you have a guy who is talented and as good as he is, who also loves the game like that and doesn’t miss, I mean, it trickles down to the rest of your team. You can’t have enough guys like that. He’s the ultimate with that perspective.

“I love the guy. I think he’s a phenomenal football player, obviously. The fact that he showed up and did what he did, it did make more difference than people know in that football game.”