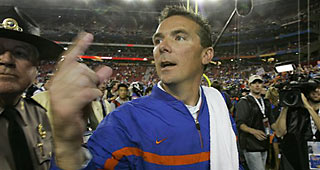 Former Gators quarterback Tim Tebow defended coach Urban Meyer at the NFL Scouting Combine amid rumors that Meyer chose winning over preparing Tebow for the next level. "To defend coach Meyer and to defend Florida, he has taught his players over the past six, eight years the best of any coach in the country," Tebow said on the NFL Network set. "You look at his players once they actually get on a team, they know football. We teach football, we teach schemes, we teach concepts that relate for the next level. So to defend coach Meyer, he does a great job of teaching guys to learn football, learn concepts and be able to translate when they get to the next level." Tebow's throwing motion, which some talent evaluators had criticized as elongated, has been heavily scrutinized since he struggled at the Senior Bowl last month.