Tuck Upset Over Trip By Adams 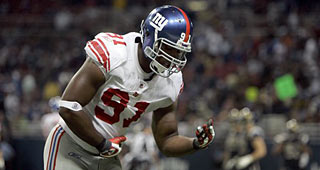 Giants defender Justin Tuck hurt his left shoulder in the team's victory over the Cowboys on Sunday night. Cowboys left tackle Flozell Adams tripped Tuck in the first half of the game, causing Tuck to fall and land awkwardly on his shoulder. "I think it was bush league," Tuck told the New York Daily News. "He did it a few times in that game. Unfortunately he didn't get called the other times." Tuck added that he wishes he had been able to get some retribution for the move. "I would've liked to have the rest of the game to punish him for that, but it didn't happen."