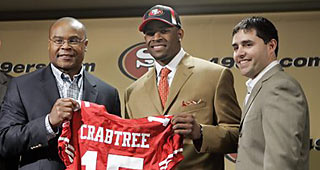 Michael Crabtree's cousin and adviser, David Wells, told ESPN that the wide receiver is prepared to sit out the 2009 season if they can't reach a fair market value with the 49ers. "No comments have been made to ESPN or anyone else," Parker told FanHouse Thursday via text message. A source in the 49ers organization said San Francisco didn't know anything about the ESPN report. Coach Mike Singletary will not address the media again until Friday, though 49ers spokesman Bob Lange told FanHouse, "This has been our approach throughout the entire process. The 49ers are not going to negotiate in the media. In our view, there has been open and positive communication between both sides."