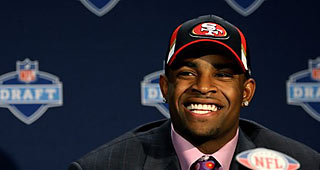 Michael Crabtree is prepared to sit out this season and re-enter the NFL draft in 2010 if he can't get a fair market deal done with 49ers. "We are prepared to do it," said David Wells, Crabtree's adviser and cousin. "Michael just wants fair-market value. They took him with the 10th pick and you have Darrius Heyward-Bey [the seventh overall pick by the Oakland Raiders] getting $38 million? This week is crucial. Michael was one of the best players in the draft and he just wants to be paid like one of the best players. This week is very crucial." Wells said he believes the 49ers have made an offer but that it is not acceptable.