Bears Would Have To Be 'Blown Away' To Draft Quarterback

Chicago Bears general manager Ryan Poles has backed Justin Fields as the team's quarterback for 2023, saying he would have to be "absolutely blown away" to take a quarterback with the No. 1 overall pick.

"Yeah. We had good conversations," Poles said during his season-ending news conference. "I'm excited for the direction he's going. As I mentioned before, he knows where he has to improve. I think he mentioned that the other day. We're excited about his development and where he goes next. He showed ability to be impactful with his legs. There's flashes with his arm. Now if we can put that together, I think we have something really good."

Alabama's Bryce Young and Ohio State's C.J. Stroud are considered the top quarterbacks in a draft class that could feature as many as four quarterbacks taken in the first round.

"We're going to do the same as we've always done," Poles said. "We're going to evaluate the draft class, and I would say this: I would have to be absolutely blown away to make that type of decision." 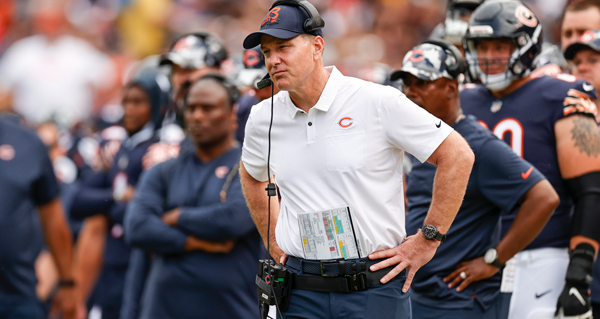 The Chicago Bears will pick No. 1 for the first time since 1947 after their 29-13 loss to the Minnesota Vikings.

The Bears secured the pick due to their loss and the Houston Texans' unexpected 32-31 win at the Indianapolis Colts.

The Bears lost 10 straight games and were 3-14 for the season.

The Chicago Bears have ruled out Justin Fields for Sunday's season finale against the Minnesota Vikings due to a hip injury.

Nathan Peterman will start for the Bears.

He rushed for 132 yards on 10 attempts against the Lions, including 105 yards in the first quarter, the most by a quarterback in a quarter over the last 45 seasons.

Matt Eberflus said Wednesday that Fields complained of hip soreness Monday and was sent to get an MRI, which revealed the quarterback suffered a strain.

With Sunday's 28-19 win over the Chicago Bears, the Green Bay Packers are now the NFL's all-time leader in regular season wins.

The Packers have 787 regular season wins, having broken a tie with the Bears (786).

Chicago Bears quarterback Justin Fields, who is dealing with a separated left shoulder with partially torn ligaments, is not expected to play Sunday at the New York Jets, a source told ESPN's Adam Schefter.

The Bears are expected to start Trevor Siemian at quarterback, and the team also promoted Nathan Peterman from the practice squad Saturday to serve as the backup at that position.

Chicago Bears quarterback Justin Fields said Wednesday that he is dealing with an injury to the acromioclavicular joint in his left shoulder and will evaluate how he feels later this week before determining whether he'll play against the New York Jets.

"It's a separated shoulder with partially torn ligaments," Fields said, describing his injury. "Basically, like an AC joint. That's my understanding of it."

Justin Fields injured his left (non-throwing) shoulder in the final moments of the Chicago Bears' 27-24 loss to the Atlanta Falcons on Sunday.

Fields suffered the injury on the first play of the Bears' last drive when he rushed toward Chicago's sideline for a 1-yard gain on a designed run.

The quarterback landed hard on his left shoulder out of bounds after he was tackled and was slow to get up. Fields took another hit moments later on another run play when Grady Jarrett hit him with his helmet as Fields was sliding.

Following the loss, Fields was carted back to the Bears locker room, where he received an X-ray and IV treatment. During his postgame news conference, Fields was not wearing a sling and said he did not know the extent of his injury.

Justin Fields continued to make his case as the top quarterback from the 2021 draft class after reaching historic heights during Chicago's 35-32 loss to the Miami Dolphins.

The Bears quarterback set multiple NFL and franchise records on Sunday. His 178 rushing yards are the most by a quarterback in a regular-season game in the Super Bowl era, surpassing the previous high set by former Falcons quarterback Michael Vick (173) in 2002.

Smith has been second-team All-Pro in each of the past two seasons. Smith requested a trade from the Bears before the start of the season after they were unable to agree to an extension.

The Bears selected Smith with the eighth overall pick in the 2018 draft.

Bill Belichick moved into sole possession of second place on the all-time wins list as the visiting New England Patriots defeated the New York Jets 22-17 on Sunday at MetLife Stadium.

Justin Fields: Tired Of Bears Being 'Almost There'

Roquan Smith Ends Hold-In, Will Play Out Season With Bears