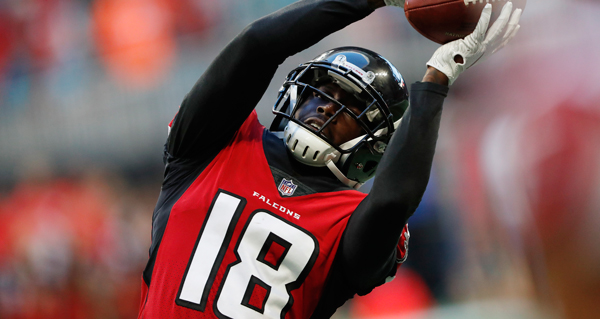 Calvin Ridley had minor foot surgery, which explains why he did not participate in this week's minicamp.

"The entire objective here is to get these guys to make sure they are in the best shape heading into training camp," Arthur Smith said. "And ready to roll ultimately, obviously, for the regular season [for] somebody in a guy like Calvin's spot."

Ridley had 90 catches for 1,374 yards and nine touchdowns last season. The Falcons picked up his fifth-year option last month.

The deal is pending a physical, the Titans said.

The Seattle Seahawks have emerged as the new betting favorite to land Julio Jones in a trade.

The Seattle Seahawks have had discussions with the Atlanta Falcons on a trade for Julio Jones.

Jones and Russell Wilson have been in touch with each other to discuss the possibility of playing for the same tema.

The Seahawks already have a talented group of wide receivers led by DK Metcalf and Tyler Lockett.

The Falcons have already received an offer of a future first round pick for Jones.

The Seahawks do not have a first-round pick in 2022 after sending it to the New York Jets last year to acquire safety Jamal Adams.

The Atlanta Falcons have discussed Julio Jones in trades and one team's offer for the wide receiver included a future first-round pick, according to a report.

The Falcons have been asking for as much in return for Jones, according to sources.

Atlanta has had discussions with the Tennessee Titans, but a source categorized a trade as a "long shot."

An interview between Shannon Sharpe and Julio Jones has ignited a "massive stink bomb" between Fox Sports and the NFL.

Jones declared he would like a trade from the Atlanta Falcons in the interview, which blindsided the team. It is unclear whether Jones knew he was live on-air.

Sources said Jones’ reps at Creative Artists Agency have reached out to Fox about the situation.

Jones signed a three-year, $66 million extension with the Falcons before the 2019 season.

“The Falcons are not going to be happy with this — and they will express their angst to the NFL,” Andrew Brandt said. “Payback’s too strong a word. But they will hope for some kind of stroke down the road.”

The NFL reportedly pressured ESPN over their involvement with a PBS "Frontline" special on concussions days before the network dropped out of the project.

Julio Jones went on record to say he expects to be traded by the Atlanta Falcons.

"I'm outta there," Jones said when reached by telephone by Shannon Sharpe on the network's "Undisputed" show.

The Falcons would prefer to trade him outside the NFC, but would do so for the right price.

Atlanta has asked teams that have inquired about Jones for a first-round draft pick in return.

The New England Patriots have held internal discussions about trading with the Atlanta Falcons for Julio Jones, according to a report.

Negotiations could intensify for several teams as June 2 approaches. That's when the Falcons can save more than $15 million against the cap by releasing or trading Jones.

The running back responded to a tweet that listed the Titans as a potential destinations for Jones.

“TITAN TF UP” Henry wrote in his quote tweet.

A trade would be difficult for the Titans to pull off. Jones has a fully guaranteed salary of $15.3 million in 2021 and Tennessee is near the bottom of the NFL in available cap space. 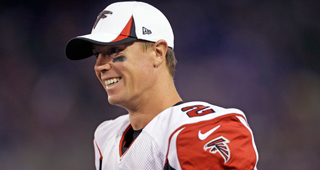 Matt Ryan is entering his 14th season, but doesn't feel as though his career is nearing an end.

Ryan wasn't sure if the Atlanta Falcons were going to use the No. 4 pick on his potential replacement last month. They used the selection on tight end Kyle Pitts, adding a weapon to the team's offense.

"In one respect you understand that if you play well for long enough, these are the conversations that are going to come up," Ryan said. "I understand that I'm not going to play forever, but I also have the mindset that I'm still playing really well and have a lot of good football in front of me."

"The most important thing for me is that it comes from the belief in the building, the people who are actually making decisions. The people who are with you day-to-day. That's where I try to keep it."

Ryan, 36, said it has been harder to block out conversations about his future as he has gotten older.

"You realize how hard it is at this age," the quarterback said. "You appreciate the success probably more now. I've never really been motivated -- you want to win, but I really hated losing more than I loved winning. It would eat at you more, and I think that only intensifies the older you get because you realize your opportunities are limited."

Lions Explored Trading Up To No. 4 To Take Ja'Marr Chase

Falcons Set To Play Game In London This Season

Kyle Shanahan 'Pretty Sure' Robert Saleh Will Interview With Falcons

Falcons Have Engaged In Trade Talks On Takk McKinley