Patrick Peterson now says he wants to remain with the Arizona Cardinals.

It was reported that Peterson requested a trade in mid-October, but the cornerback backtracked just a few days later.

"I just want to apologize to everybody for asking for that trade in the middle of the season," Peterson said. "I'm here to stay, baby."

He said on Wednesday that he'll honor his contract, which goes through the 2020 season. 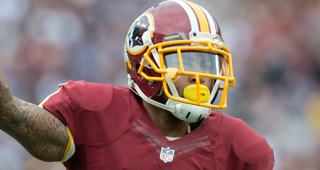 DeSean Jackson, who is still under contract with the Tampa Bay Buccaneers for another season, says he'd love to join the Los Angeles Rams.

Jackson made the comments when it was suggested on the Simms and Lefkoe Podcast that he could join the San Francisco 49ers.

"I don't know about Frisco, man. State tax is crazy, man," the receiver said. "That is home too though. I don't know. ... If anything, I would like to kind of end up in L.A., being a Ram. Sean McVay, you know, we got some connection from when I was in D.C., but we'll see how it plays out, man. Right now, I got another year in Tampa. So we'll see how it plays out, man."

Jackson, 32 is currently the oldest receiver on Tampa Bay's roster by seven years.

While a trade may seem likely, Antonio Brown hasn't closed the door on a return to the Pittsburgh Steelers.

The Steelers haven't yet given Brown and his agent permission to seek a trade.

Even if he's eventually dealt, a move isn't likely soon. The Steelers would carry $21.1 million of Brown's salary in dead cap if they trade him before June 1.

Eli Manning's agent has yet to speak with the New York Giants about his future.

Tom Condon was asked if he expects Manning to return to the Giants next season.

The Giants have missed the playoffs in five of the past six seasons and is now 38 years old with one season remaining on his contract.

The Giants could approach Manning about a pay cut.

New York could target a quarterback with the sixth overall pick while there are also a few free agents at the position with ties to Pat Shurmur.

The Jacksonville Jaguars could become leading contenders to land Nick Foles this offseason.

John DeFilippo has been named Jacksonville's offensive coordinator. DeFilippo was the quarterbacks coach for the Philadelphia Eagles when Foles led the team to a Super Bowl victory over the New England Patriots last February.

It remains to be seen how a team could acquire Foles this offseason -- whether he'll become a free agent or the Eagles will retain his rights to swing a trade.

Brown had a FaceTime conversation with Rice on Sunday.

Rice was interviewed by a local Bay Area station on Monday.

"He's talking about running the hill with me -- doing all that and just working out and just picking my brain. I don't know if it's going to happen because it's going to be up to [coach] Kyle Shanahan and also [general manager] John Lynch, but I'm all for it if they want him to come on board."

Art Rooney II publicly said it is "hard to envision" Antonio Brown remaining with the Pittsburgh Steelers in 2019.

Brown's absence in Week 17 practices resulted in a benching for the season finale.

"There's not much we can do right now; we have time to make a decision," Rooney said. "We'll look at all the options. We're not going to release him, that's not on the table. But I will say all other options are on the table. Whether the situation can be reconciled and have him back on the team next year, we're a long way from thinking that can happen. We're not closing the door on anything at this point."

The Steelers couldn't trade Brown until March 13th. Brown's $2.5 million roster bonus due March 17 would incentivize the Steelers to deal him. The Steelers would absorb $21.12 million in 2019 dead money on the salary cap by trading Brown, but taking his $22.165 million cap charge off the books would offset that cost.

Rooney said in the interview that salary-cap implications would not "box us into anything." 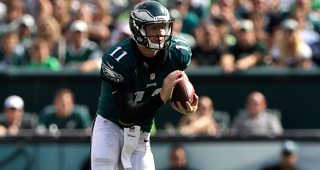 During an appearance on 97.5 The Fanatic in Philadelphia on Wednesday morning, Adam Schefter discussed a hypothetical scenario involving the Eagles' quarterbacks.

After leading the team to their first Super Bowl win last season, Nick Foles has taken over for an injured Carson Wentz and had success yet again.

While discussing a scenario, however unlikely, in which the Eagles would be open to trading Wentz, Schefter estimated that the haul for the young quarterback would be quite high.

"I think if the Eagles decided they wanted to trade Carson Wentz, they could name their asking price. I would guess that three first-round picks would be the starting point," the ESPN Insider said.

The New York Giants have yet to decide on the future of Eli Manning in 2019.

Dave Gettleman met with Manning on Monday for a long, "no holds barred" conversation.

Manning has always been an inconsistent quarterback and generally struggled in 2018 compared to peers in his age group.

“He still can make the NFL throws. He’s still got it, that part,” Gettleman said.

The Giants own the sixth overall pick a year after passing on a number of quarterbacks with the No. 2 pick.

Mike Tomlin denied reports that Antonio Brown has requested to be traded.

Tomlin said Brown didn't play in Week 17 because the two had a "lack of communication" in the days leading up to the game.

Asked Wednesday if he thought Brown quit on the Steelers, Tomlin responded that "you can call it what you want to call it."

Brown hasn't commented publicly on the situation, but he did tweet a seemingly inspirational message Wednesday.