The Kansas City Chiefs have agreed to a five-year contract extension with kicker Harrison Butker worth $20 million, according to a source.

The $4 million annual average on the extension would tie him for eighth among the league's highest-paid kickers.

Butker, 23, has made 62 of 69 field goal attempts since joining the Chiefs.

His 90 percent success rate is ninth best in the league for kickers with at least 10 attempts.

The Indianapolis Colts have agreed to a four-year contract extension with Kenny Moore.

Moore will be the NFL's highest paid slot cornerback.

Moore had a year remaining on his deal before moving to a restricted free agency tag.

The Philadelphia Eagles have signed Carson Wentz to a four-year, $128 million contract extension. The deal contains guarantees of $107 million.

The new deal will keep Wentz with Philadelphia through the 2024 season.

The Eagles traded up to use the No. 2 pick in the 2016 NFL Draft on Wentz, who played his college football at North Dakota State.

The deal's average annual value ($32M) doesn't surpass that of Russell Wilson ($35M), but Wentz does surpass him and all NFL players in guaranteed money. 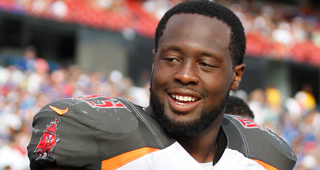 The Carolina Panthers have agreed to sign Gerald McCoy.

McCoy and the Tampa Bay Buccaneers parted ways this offseason.