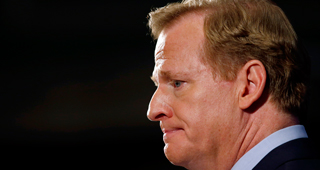 Last week, the NFL formally appealed Watson's six-game suspension, which was handed down by the NFL's disciplinary officer Sue. L Robinson earlier this month. At a league meeting called to formally approve the Denver Broncos' new ownership group Tuesday, Goodell was asked why the NFL appealed Robinson's decision and was seeking a suspension of at least a year for the Cleveland Browns quarterback.

Daniel Snyder testified for nearly 11 hours during a private deposition Thursday with members of the U.S. House Committee on Oversight and Reform regarding the Washington Commanders' workplace culture.

Snyder testified voluntarily but did so under oath. His attorney had negotiated with the committee for nearly a month over how he would testify.

Any or all of the transcript can be made public, but that likely will take several days. Snyder testified via videoconference from overseas.

The committee began investigating Snyder and the organization in October, looking into past issues.

The Houston Texans have reached settlements with 30 women who made claims or were prepared to make them against the team for its alleged role regarding sexual misconduct allegations against Deshaun Watson in massage sessions.

One of the 30 women already had filed a civil suit against the Texans in June, accusing the team of "enabling Watson's behavior." Tony Buzbee said that case is among those being settled.

Buzbee said terms of each of the 30 settlements are confidential.

"We were shocked and deeply saddened when we first learned of the allegations against our then franchise quarterback in March 2021," Texans owners Janice McNair, Hannah and Cal McNair said in a statement. "Although our organization did not have any knowledge of Deshaun Watson's alleged misconduct, we have intentionally chosen to resolve this matter amicably. This is not an admission of any wrongdoing, but instead a clear stand against any form of sexual assault and misconduct.

"We hope that today's resolution will provide some form of closure to the parties involved, our fans and the Houston community at large. As an organization, we will now turn our focus to the future and doing what we can to ensure respect for all."

As recently as 2015, the figure was $223 million. The per team total is expected to comfortably go past $400 million when the next round of media contracts begin in 2023.

The Denver Broncos recently sold for $4.65 billion, signaling the current value of the league.

Deshaun Watson is facing 24 accusers in civil court, but under the NFL's disciplinary process the number of accusers is down to four.

The NFL originally spoke to 12 of the Watson accusers, before presenting five cases during the disciplinary hearing that began 13 days ago.

However, Josina Anderson of CBS Sports reports that the case centers around four women, not five.

Daniel Snyder is taking issue with the claim that he has refused to appear before the U.S. House Oversight & Reform Committee for a deposition.

A spokesperson for the Washington Commanders owner issued a statement on Monday night.

"Mr. Snyder has not refused to appear for a deposition," the statement explains. "The Committee offered only one date — June 30 — and Mr. Snyder's attorney is out of the country and unavailable on that date. Mr. Snyder's lawyer has provided alternative dates to the Committee and looks forward to finding a path forward for Mr. Snyder's further cooperation and to address remaining due process concerns."

The attorney for Daniel Snyder reiterated Monday that the Washington Commanders owner would not testify before Congress on June 22, despite a request from the committee to reconsider.

Attorney Karen Patton Seymour declined the initial invitation from the House Oversight Committee investigating the Commanders' alleged "toxic workplace culture," saying that Snyder had a "longstanding Commanders-related business conflict" and is out of the country at the end of June.

On Friday, chairwoman Carolyn Maloney, D-N.Y., had sent Snyder's attorney a six-page letter stating Snyder could testify virtually at the June 22 hearing, as Roger Goodell is expected to do.

In July 2021, the NFL fined the Commanders $10 million after its investigation into the franchise's workplace culture under Snyder's ownership. Congress began its investigation shortly after, in October, and is also investigating allegations by a former employee who said she was sexually harassed by Snyder in 2019.

Two more lawsuits will be filed against Deshaun Watson, according to a report.

The NFL declined comment last week in response to two different inquiries asking whether the circumstances had changed regarding the possibility of Watson being placed on the Commissioner Exempt list.

The Denver Broncos have entered a sale agreement with the Walton-Penner family ownership group.

The agreement is for $4.65 billion, according to multiple reports.

That would be a record price paid for a North American sports franchise.

The Walton-Penner group -- headed by Walmart heir Rob Walton; his daughter, Carrie Walton Penner; and her husband, Greg Penner -- will also include Mellody Hobson, co-CEO of Ariel Investments as well as chair of the board of the Starbucks Corp. and a director at JP Morgan Chase.

Another woman has filed a lawsuit against Deshaun Watson, joining 22 others who accused him in civil cases filed in 2021 of inappropriate sexual conduct during massage sessions.

In the 23rd civil case filed Tuesday in Texas against Watson, the lawsuit states that the plaintiff had her first massage session with Watson during the summer of 2020 and that his "behavior grew worse."

During the third and final massage, she alleges in the lawsuit that Watson exposed himself to her, touched the woman between the legs and "repeatedly requested" her to have sex with him.

Rusty Hardin, who also represents Watson, said in a statement later Tuesday that his client "vehemently denies the allegations" of sexual misconduct "just as he has since she first discussed them with members of our firm in March of last year."

Steelers QB Dwayne Haskins Dies After Being Struck By Vehicle

Judge Rules Deshaun Watson Can Be Questioned In Nine Cases

Bill Belichick Is Highest Paid Coach In U.S. At $18M Per Year

NFL Ratings Up Seven Percent From 2020 For Week 1